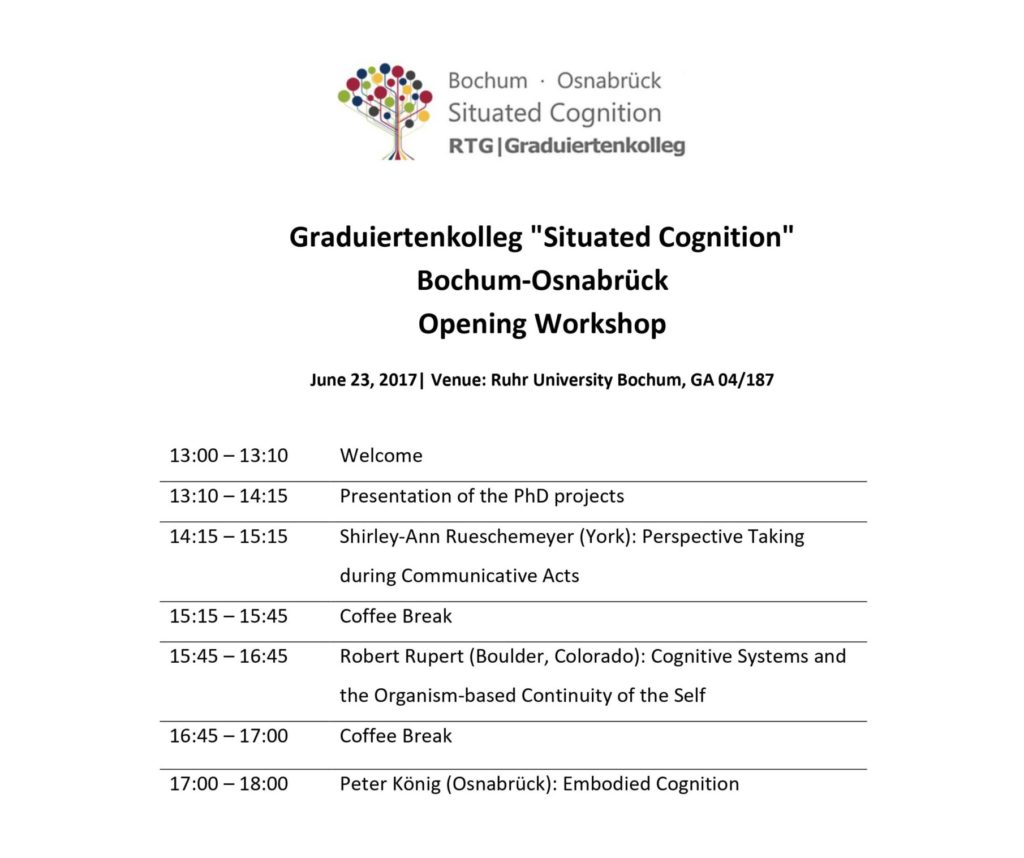 We are happy to report that the opening conference of the DFG research training group (RTG) “Situated Cognition”, held on June 23rd at Ruhr-University Bochum, was a complete success!

The conference was opened by the 12 PhD students, Benjamin Angerer, Lasse Bergmann, Samuel Cosper, Samantha Ehli, Dali Gamsakhurdashvili, Matej Kohar, Nicolas Kuske, Guido Robin Löhr, Jumana Morciglio, Julian Packheiser, Elmarie Venter, Julia Wolf, and the Post-Doc Dr. Beate Krickel. They presented the projects and introduced the key aspects of Situated Cognition. Thereby, an outlook on the work of the RTG for the next three years of research was provided.
The presentations were followed by three invited talks focusing on new empirical findings and theoretical challenges in the context of Situated Cognition.

Dr. Shirley-Ann Rueschemeyer from the University of York started off with her talk on “Perspective Taking during Communicative Acts”, in the course of which she presented her current collaborative research on the question in how far a listener’s understanding of a sentence is influenced by the presence of other listeners that have a different knowledge background. Her findings were striking: The presence of listeners with different contextual knowledge have an effect on the neural activations of the other listener. The so-called theory of mind system is driving activations in the flexible semantic system. So the presence of other listeners seem to alter the experience of words in different contexts.

In the second talk, Prof. Robert Rupert from Boulder University, Colorado, who is also the first fellow of the RTG, presented his approach to “Cognitive Systems and the Organism-based Continuity of the Self”. He addressed the highly debated issue of personal identity and challenged the neuroscientific view of the self, consisting only of a special kind of integrated collections of brain mechanisms, which are functionally characterized. He states that the self is not a psychological but a biological kind, constituted by a dynamic neural circuity, and that environmental influences do not lead to a different self.
The last talk was given by Prof. Peter König from Osnabrück University, who offered a deeper insight into the field of “Embodied Cognition”. According to his theory and studies, action is the key to cognition, for which the necessity of eye movements in the case of perception is a prime example. Furthermore, the results of his blind-spot study speak in favor of the predictive coding idea.

The day was completed by a joint dinner at Tapas restaurant in Bochum city which provided an excellent opportunity to continue discussions raised during the conference.