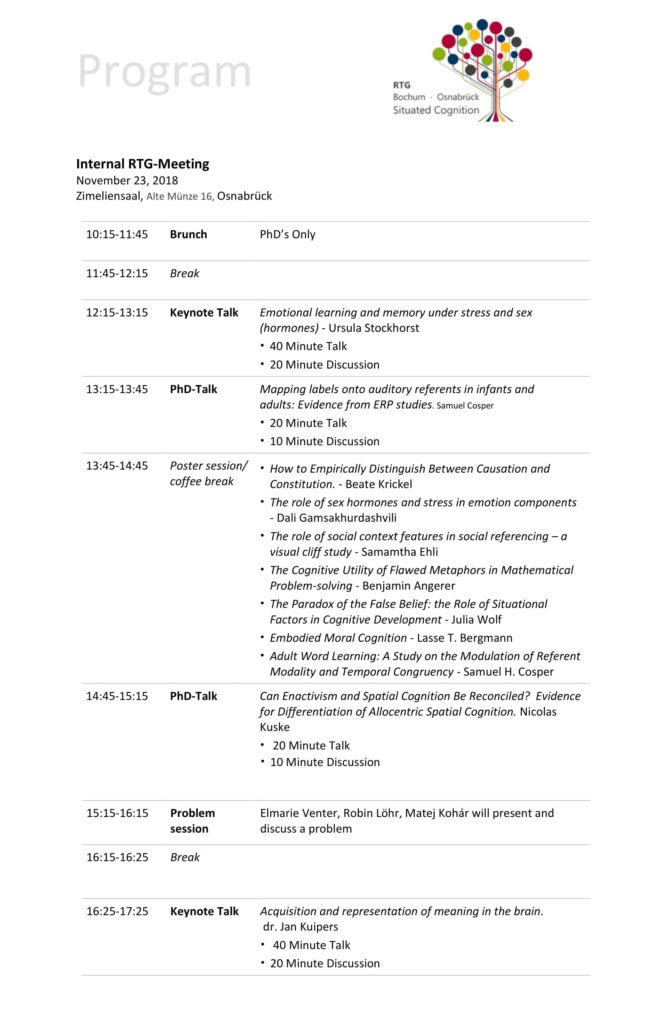 On 23rd of November 2018, we held our fourth internal workshop at the University of Osnabrück. The overall theme was “Topics in Situated Cognition”.

There were two keynote talks featured at this workshop. The first keynote talk was given by Ursula Stockhorst from the University of Osnabrück. The title of Prof. Dr. Stockhorst’s talk was “Emotional learning and memory under stress and sex (hormones)”. The main objective of this talk was to share empirical design and justification for an empirical study on the effects of stress and hormones on emotional processes, such as emotion recognition. The second keynote talk was given by Jan Kuipers from the University of Stirling. The title of Dr. Kuipers’ talk was “Acquisition and representation of meaning in the brain”. Dr. Kuipers discussed the ways in which the brain processes and understands meaning, particularly applied to the acquisition and representation of the meaning of words or language.

Two additional talks were given during this internal workshop, both by PhD candidates from the RTG Situated Cognition. The first of these PhD talks was given by Samuel Cosper. The title of this talk was “Mapping labels onto auditory referents in infants and adults: Evidence from ERP studies”, where Samuel Cosper shared the empirical paradigm behind his experiments on infant word learning, as well as some preliminary findings. The second PhD talk was given by Nicolas Kuske. The title of this talk was “Can Enactivism and Spacial Cognition be Reconciled? Evidence for Differentiation of Allocentric Spacial Cognition”. This talk also focused on the empirical paradigm behind a set of experiments on spacial cognition, with preliminary findings.

Aside from the keynote and PhD talks, there were two other additional events that took place at this internal workshop. The first of these events was a poster session, where RTG Situated Cognition PhD candidates shared posters of their current research. The poster topics ranged from linguistics, to sex hormones and stress, mathematical problem solving, social referencing, cognitive development, and moral cognition. The second event that took place during this internal workshop was a problems session, where PhD candidates were given the opportunity to share conceptual and empirical problems that arose in their current research projects. After presenting the conceptual problem, the participants of the internal workshop worked together in an open forum brainstorming session to offer advise and help of how to overcome these problems.

The RTG benefitted from this internal workshop in several ways. First of all, the two keynote talks were directly relevant to several ongoing PhD projects, thus sharing of research was facilitated. Secondly, this internal workshop offered a platform for receiving critical feedback in a number of different ways. The PhD talks allowed the PhD candidates to share their current research, as well as results from empirical work. The discussion sessions following the talks allowed for structured and critical feedback of the projects and the presentation of the data acquired. The poster session allowed for a less structured and more relaxed discussion of current PhD projects, offering more creative (as opposed to critical) discussions of the topics. Lastly, the problems session allowed for a new form of feedback, namely, the active help in overcoming a conceptual problem while the project is still developing.

There was also an RTG Situated Cognition PhD candidate brunch that took place before the workshop. This allowed for a relaxed socializing atmosphere between the PhD candidates prior to the workshop, where the candidates were able to discuss their work amongst each other.