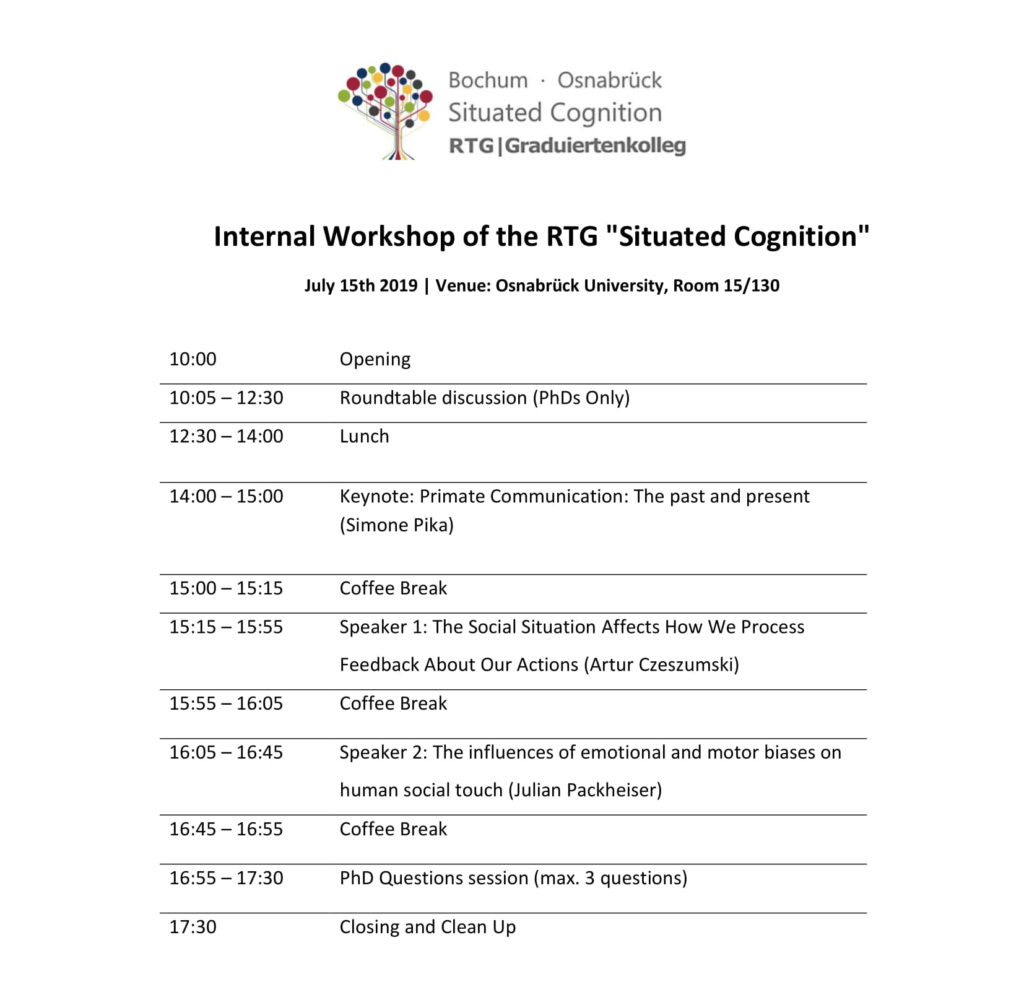 The workshop started out with a two-hour, PhD-only roundtable discussion. In the course of the discussion each PhD student of the RTG was asked to explain their projects and how their results compare to the framework of situated cognition. The other students could then ask questions for about ten minutes. The roundtable resulted in a fruitful discussion that helped the PhDs to better understand each other’s work and connect it to their own. It was the first step in bringing together the results of empirical researchers and philosophers in the RTG at the University of Osnabrück and Bochum. The second and final step will be taken at the closing workshop of the RTG Situated Cognition in November in Bochum, where the results will be integrated to formulate their joint impact on cognition research.

After a lunch break PI’s, PhD’s and associated members of the RTG listened to a talk by the keynote speaker Prof. Dr. Simone Pika. Her talk “Primate Communication: The past and present” focussed on language use in animals, especially in primates. She showed their usage of language to be much more refined than one might intuitively expect. Although apes cannot learn hierarchically structured sequences of words, they do communicate with a repertoire of sounds as well as clearly discernible gestures. These gestures speak for an important role of bodily processes in developing language and the associated cognitive structures.

Professor Pika was followed by the talk “The Social Situation Affects How We Process Feedback About Our Actions” held by Artur Czeszumski, an associated member of the RTG and PhD student. He presented the results of an EEG-experiment investigating the effects of competition and cooperation on processes in the brain. His study showed that participants processed feedback about their task performance differently in competitive than in cooperative situations.

The final talk of the day was given by Julian Packheiser, a former PhD in the RTG. His talk on “The influences of emotional and motor biases on
human social touch” led through several studies which relate lateralization of the human brain to a bias when choosing a side during emotional embrace or kissing behaviour. He provided evidence that motor lateralization has the strongest effect. Packheiser also showed that the perceived social situation, as for example defined through the gender of the interaction partners, significantly affects the side of the embrace. Both the talk of Czeszumski as well as of Packheiser focussed on the importance of the social situation for human cognition.

The workshop closed with the opportunity for the PhD Students to ask questions related to their projects for an open discussion with the PIs and other PhDs. Nicolas Kuske tried to clarify the notion of representation as interaction. Since his is an empirical project, this closing discussion exemplified the interdisciplinary approach of the RTG Situated Cognition.