“In Search of a New Theory of Cognition” – Closing Workshop

In this last internal workshop, the first cohort of PhD students in the RTG brought together their results to discuss their connections and implications for further research.

The fifth internal workshop of the DFG research training group (RTG) “Situated Cognition” took place at the University of Osnabrück on the 5th of July 2019. The workshop contained two parts. The first part focussed on communication especially among PhDs, while the second part of the workshop focussed on experimental work concerning joint action in primates and humans.

The workshop started out with a two-hour, PhD-only roundtable discussion. In the course of the discussion each PhD student of the RTG was asked to explain their projects and how their results compare to the framework of situated cognition. The other students could then ask questions for about ten minutes. The roundtable resulted in a fruitful discussion that helped the PhDs to better understand each other’s work and connect it to their own. It was the first step in bringing together the results of empirical researchers and philosophers in the RTG at the University of Osnabrück and Bochum. The second and final step will be taken at the closing workshop of the RTG Situated Cognition in November in Bochum, where the results will be integrated to formulate their joint impact on cognition research.

After a lunch break PI’s, PhD’s and associated members of the RTG listened to a talk by the keynote speaker Prof. Dr. Simone Pika. Her talk “Primate Communication: The past and present” focussed on language use in animals, especially in primates. She showed their usage of language to be much more refined than one might intuitively expect. Although apes cannot learn hierarchically structured sequences of words, they do communicate with a repertoire of sounds as well as clearly discernible gestures. These gestures speak for an important role of bodily processes in developing language and the associated cognitive structures.

Professor Pika was followed by the talk “The Social Situation Affects How We Process Feedback About Our Actions” held by Artur Czeszumski, an associated member of the RTG and PhD student. He presented the results of an EEG-experiment investigating the effects of competition and cooperation on processes in the brain. His study showed that participants processed feedback about their task performance differently in competitive than in cooperative situations.

The final talk of the day was given by Julian Packheiser, a former PhD in the RTG. His talk on “The influences of emotional and motor biases on
human social touch” led through several studies which relate lateralization of the human brain to a bias when choosing a side during emotional embrace or kissing behaviour. He provided evidence that motor lateralization has the strongest effect. Packheiser also showed that the perceived social situation, as for example defined through the gender of the interaction partners, significantly affects the side of the embrace. Both the talk of Czeszumski as well as of Packheiser focussed on the importance of the social situation for human cognition.

The workshop closed with the opportunity for the PhD Students to ask questions related to their projects for an open discussion with the PIs and other PhDs. Nicolas Kuske tried to clarify the notion of representation as interaction. Since his is an empirical project, this closing discussion exemplified the interdisciplinary approach of the RTG Situated Cognition.

There were two keynote talks featured at this workshop. The first keynote talk was given by Ursula Stockhorst from the University of Osnabrück. The title of Prof. Dr. Stockhorst’s talk was “Emotional learning and memory under stress and sex (hormones)”. The main objective of this talk was to share empirical design and justification for an empirical study on the effects of stress and hormones on emotional processes, such as emotion recognition. The second keynote talk was given by Jan Kuipers from the University of Stirling. The title of Dr. Kuipers’ talk was “Acquisition and representation of meaning in the brain”. Dr. Kuipers discussed the ways in which the brain processes and understands meaning, particularly applied to the acquisition and representation of the meaning of words or language.

Two additional talks were given during this internal workshop, both by PhD candidates from the RTG Situated Cognition. The first of these PhD talks was given by Samuel Cosper. The title of this talk was “Mapping labels onto auditory referents in infants and adults: Evidence from ERP studies”, where Samuel Cosper shared the empirical paradigm behind his experiments on infant word learning, as well as some preliminary findings. The second PhD talk was given by Nicolas Kuske. The title of this talk was “Can Enactivism and Spacial Cognition be Reconciled? Evidence for Differentiation of Allocentric Spacial Cognition”. This talk also focused on the empirical paradigm behind a set of experiments on spacial cognition, with preliminary findings.

Aside from the keynote and PhD talks, there were two other additional events that took place at this internal workshop. The first of these events was a poster session, where RTG Situated Cognition PhD candidates shared posters of their current research. The poster topics ranged from linguistics, to sex hormones and stress, mathematical problem solving, social referencing, cognitive development, and moral cognition. The second event that took place during this internal workshop was a problems session, where PhD candidates were given the opportunity to share conceptual and empirical problems that arose in their current research projects. After presenting the conceptual problem, the participants of the internal workshop worked together in an open forum brainstorming session to offer advise and help of how to overcome these problems.

The RTG benefitted from this internal workshop in several ways. First of all, the two keynote talks were directly relevant to several ongoing PhD projects, thus sharing of research was facilitated. Secondly, this internal workshop offered a platform for receiving critical feedback in a number of different ways. The PhD talks allowed the PhD candidates to share their current research, as well as results from empirical work. The discussion sessions following the talks allowed for structured and critical feedback of the projects and the presentation of the data acquired. The poster session allowed for a less structured and more relaxed discussion of current PhD projects, offering more creative (as opposed to critical) discussions of the topics. Lastly, the problems session allowed for a new form of feedback, namely, the active help in overcoming a conceptual problem while the project is still developing.

There was also an RTG Situated Cognition PhD candidate brunch that took place before the workshop. This allowed for a relaxed socializing atmosphere between the PhD candidates prior to the workshop, where the candidates were able to discuss their work amongst each other.

We were very happy to welcome Klaus Gramann to our third RTG workshop where he held a guest lecture on human neuroimaging. Three of our phd students (Nico Kuske, Lasse Bergmann and Dali Gamsakhurdashvili) proceeded to present their findings of the last few months. The last talk of the day was held by our PI Tobias Schlicht on intentionality vs representation. 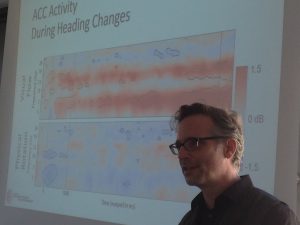 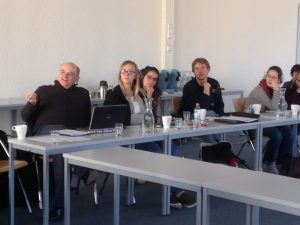 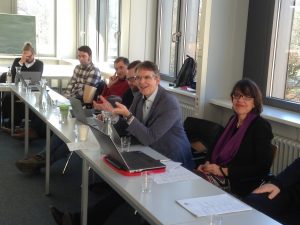 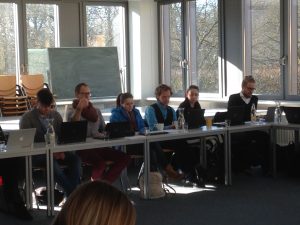 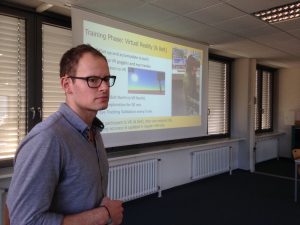 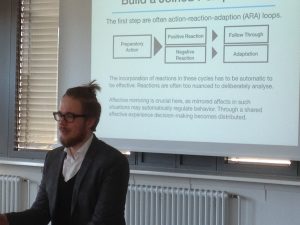 The second workshop of the RTG was oppened by Jutta Mueller’s talk on auditory sequence learning at the root of human grammar. Afterwards, five PhDs (Benjamin Angerer, Samantha Ehli, Robin Löhr, Samuel Cosper and Julia Wolf) had the opportunity to present the progress they have made on their projects so far. Edouard Machery then closed the conferences with a guest lecture on the amodal brain.

We are happy to report that the opening conference of the DFG research training group (RTG) “Situated Cognition”, held on June 23rd at Ruhr-University Bochum, was a complete success!

The conference was opened by the 12 PhD students, Benjamin Angerer, Lasse Bergmann, Samuel Cosper, Samantha Ehli, Dali Gamsakhurdashvili, Matej Kohar, Nicolas Kuske, Guido Robin Löhr, Jumana Morciglio, Julian Packheiser, Elmarie Venter, Julia Wolf, and the Post-Doc Dr. Beate Krickel. They presented the projects and introduced the key aspects of Situated Cognition. Thereby, an outlook on the work of the RTG for the next three years of research was provided.
The presentations were followed by three invited talks focusing on new empirical findings and theoretical challenges in the context of Situated Cognition.

Dr. Shirley-Ann Rueschemeyer from the University of York started off with her talk on “Perspective Taking during Communicative Acts”, in the course of which she presented her current collaborative research on the question in how far a listener’s understanding of a sentence is influenced by the presence of other listeners that have a different knowledge background. Her findings were striking: The presence of listeners with different contextual knowledge have an effect on the neural activations of the other listener. The so-called theory of mind system is driving activations in the flexible semantic system. So the presence of other listeners seem to alter the experience of words in different contexts.

In the second talk, Prof. Robert Rupert from Boulder University, Colorado, who is also the first fellow of the RTG, presented his approach to “Cognitive Systems and the Organism-based Continuity of the Self”. He addressed the highly debated issue of personal identity and challenged the neuroscientific view of the self, consisting only of a special kind of integrated collections of brain mechanisms, which are functionally characterized. He states that the self is not a psychological but a biological kind, constituted by a dynamic neural circuity, and that environmental influences do not lead to a different self.
The last talk was given by Prof. Peter König from Osnabrück University, who offered a deeper insight into the field of “Embodied Cognition”. According to his theory and studies, action is the key to cognition, for which the necessity of eye movements in the case of perception is a prime example. Furthermore, the results of his blind-spot study speak in favor of the predictive coding idea.

The day was completed by a joint dinner at Tapas restaurant in Bochum city which provided an excellent opportunity to continue discussions raised during the conference.